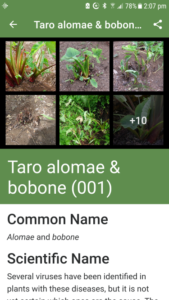 Work on taro virus diseases began at Dala Experimental Station, Solomon Islands, in the late 1960s but, even today, the cause of the more important lethal diseases still remains unclear.

The research in Solomon Islands, and in other countries of the region, has revealed a complex of six viruses, some found only in that country and in Papua New Guinea, and others more widely distributed. This story, written by Grahame Jackson and David Gollifer, who worked on the diseases when at Dala, reviews the viruses discovered, the diseases they cause, and the insect vectors that spread them.

The story concludes with reasons why the research should be continued but stresses that without developing research capacity in Pacific island countries, major pest and disease problems are likely to remain unresolved.