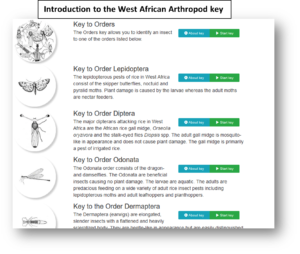 The correct identification of insect pests and their natural enemies is critical for developing sound and sustainable pest management strategies: this is particularly so for rice. In the 1960’s, a comprehensive rice insect pest and natural enemy collection was established at the International Rice Research Institute (IRRI) in the Philippines, with the aim of helping those in national rice research programs to identify rice arthropods.

While the printed versions of both books have been out-of-print for several years, a recent upgrade of the Lucid software program, which makes it possible to convert paper-based, dichotomous keys to interactive pathway keys, means that both keys are now freely available to use on the Internet, courtesy of IAPPS.

Adding arthropod images: Note that the IRRI key will soon be updated by adding a large number of images of important insect pests and natural enemies. E.A. Heinrichs ([email protected]) would appreciate any good resolution images that colleagues would be willing to submit for adding to the key – with due acknowledgement